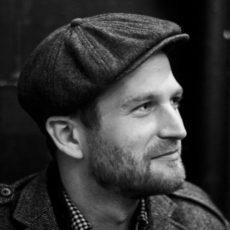 In his music and his manner, Cecil Otter seems to belong to a different era of American history. Usually found brooding under the shadow of a fedora, he’s the kind of guy who’s got a five o’clock shadow by mid-morning. At times, the Minneapolis based emcee/producer feels more like a boxcar storyteller, or the down on his luck country singer in the last dive bar on earth. His character is possessed by some lost American spirit of honesty and romanticism: he takes only one meal a day and prefers for his correspondence to be scrawled on bar napkins rather than in emails.

Cecil fell in love with hip-hop at 8 years old, when his 14 year old sister ran away from home and left him with a box of rap tapes. From there he began writing stories, and the stories later became rhymes. Inspired by underground legends like Ant (of Atmosphere) and Sixtoo, Cecil delved into the crates and circuits of drum machines to craft his own haunting sound and unique style. Later, he would earn his stripes as a co-founder of the Doomtree crew, one of the twin cities’ most dominant underground rap outfits.

“Rebel Yellow”, completely self-produced, is a work full of nostalgia and intrigue. With a bare-bones, bittersweet precision, Cecil unfolds a seedy universe of heartbreak and illusive redemption, delivering his verses with the self-assured, unhurried cadence of a man walking to the goldrush. In his beats, delicate guitar lines surface and submerge; vinyl crackles like dying embers; and the snare drum sneaks a little flourish but keeps simple time while the audience turns to see what it has missed. Laid end-to-end, these tracks speak of restlessness and a nigh-apocalyptic sonic sensibility. In the end, Cecil Otter is a compelling musician for the same reasons he’s good with cards: The technique runs on charm, patience, intuition, and precision.

Most recently, Cecil’s cast his lot with Strange Famous Records, teaming up with label-owner Sage Francis to give the devil a run for his money. SFR has agreed to re-release Rebel Yellow, get it proper distribution, while working toward the release of Cecil’s follow up album, “Porcelain Revolver.”