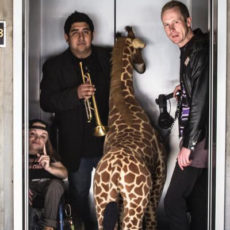 Fronted by the wheelchair bound MC/beat-maker/activist/educator/shit-talker Kalyn, the band is a combination of live and electronic instruments provided by Joshua Trinidad (trumpet) and Gregg Ziemba (drums) with a more jazzy, noisey, funky sound than the traditional hip-hop group. Their unconventional setup of live instruments and Kalyn’s produced beats presents a polished sound with old-school lyrics that maintain a sarcastic yet independent and heavy consciousness. Kalyn is 27 years old, weighs 53 pounds and measures three feet, six inches tall. She’s light enough to carry, compact enough to hide under a winter coat and is sometimes mistaken for a child. But Kalyn, who has the brittle-bone disability osteogenesis imperfecta, is hardly innocent, precious, or inconspicuous. The band has been featured on the cover of the Village Voice as well as in SPIN Magazine, Huffington Post, High Times Magazine and more.

The band unknowingly started in the summer of 1997 when Kalyn moved back from California to her hometown and was invited to attend and corrupt the 14th annual week-long Colorado Jr. Wheelchair Sports Camp.  The band tours the states and beyond from their home in Denver. “The last time I met with Ikey was to catch up on life stuff and discuss his work with WSC,” explains SAGE FRANCIS. “Despite being a music virtuoso and seasoned producer, he seemed equally excited as he was nervous to tackle a hip-hop project. We discussed what style of music might best suit Kalyn, but from everything I had heard it was all on the right path.”

Ultimately, Owens stripped apart the original compositions that the band brought to the studio and weaved his own weird sonic tapestry, merging live instruments with electronic compositions that lend an
exciting and distinctive vibe to the project. While Ikey rebuilt the tracks, Kalyn composed the majority of the album’s lyrics almost completely on the fly in-studio.

Despite the tongue-in-cheek title of the album, this means a great deal in the sonic journey of an already well celebrated hip-hop band. It represents a significant move from DIY mixtapes to a proper release with evolved quality of sound and songwriting. WSC has cemented their transition by signing with SFdigi, a brand new imprint under the STRANGE FAMOUS RECORDS banner.

“If there were ever a moment for a queer, disabled rapper with a love for pot, jokes, and revolution to be a star, the moment is now” – Village Voice