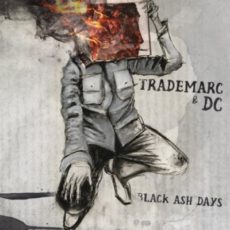 Blood Meridian is the Strange Famous debut LP of the versatile and ferocious Boston, Massachusetts-area emcee TRADEMARC. It is also the latest milestone in a decades-long career that has taken the man born Marc Predka from the deep underground of the Northeast hip hop scene to signing his name at the bottom of a contract with the vaunted Columbia Records label to the brink of an internal abyss that he was never guaranteed a return from. Trademarc’s tale is one that has been hard-earned. It is a story that is worth telling, and it’s also one that he wouldn’t mind taking a break from speaking on.

When the world last heard from Predka, it was 2015 and he had collaborated with producer DC The MIDI Alien to create the album Black Ash Days, a deeply personal documentation of his descent into complete emotional and mental breakdown. The album was a stark and harrowing look into his darkest moments, including accounts of his multiple suicide attempts. It was also an important step in his catharsis. Marc explains the decisions he made when deciding how to follow such a heavy and intimate record: “I felt the need to expand my reach beyond that subject matter. I didn’t want those experiences to define who I am as a person and artist forever. The BAD album will always be there as a document of that side of me. I live with Bi-Polar Disorder, which many people do, but with this project I felt it would be healthy to display more range than just being ‘the depressed, suicidal guy.’ I’d covered that ground in depth, and wanted to show what it was like to spend some time in the light at the end of the tunnel.”

The sound of Blood Meridian was shaped by the Filthy Animals production team, and the vibe came about in part due to the influence of the producers’ PENPALS crew. “I feel like being around those guys really helped open me up to different, more positive, even humorous avenues of music I probably wouldn’t have explored without them. They really helped get me out of my comfort zone with their amazing work,” Trademarc explains. “The one song I had the most fun writing and recording was “Set It Off”, a posse cut with Penpals and Lars Viola.” The lighthearted, upbeat affair allowed Predka to return to his roots in hip hop, to a time when bonds were formed through good-natured competition among emcees battling to put down the best rap on a track. “This was just a bunch of dudes laughing and recording in Brooklyn for a weekend. I really think that energy is well represented in that song.”

Trademarc is no stranger to forming and furthering friendships through music. He began his musical journey with fellow indie rap heavy-hitters 7L & Esoteric (CZARFACE), forming his first official group (under the name God Complex) with the duo and other college friends in the mid-1990s. After the crew’s amicable split, Trademarc hooked up with another (more literal) heavy-hitter: his cousin, professional wrestler (and rapper) John Cena. The pair released the RIAA certified-platinum LP You Can’t See Me on Columbia Records, touring the US and Europe and making high profile appearances on TV’s Monday Night RAW. Predka struck out on his own with his follow-up, the more conceptual Inferiority Complex, and in 2008 joined old friends Esoteric and DC for 3 releases as the indie rap supergroup East Coast Avengers.

After the Avengers disassembled, Trademarc’s next endeavor led to a fortuitous connection: “Sage Francis liked the video that was released for the title track of Black Ash Days and we started a dialogue. It was an amazing moment for me as I remember bumping Personal Journals (Sage’s 2002 debut LP) quite a bit when that dropped.” The two continued to trade emails and demos, and after hearing what was in the works for Trademarc’s next project, an official alliance was inevitable. “Sage graciously welcomed me to the Strange Famous family, and Blood Meridian is the result.”

Francis makes an appearance on the Blood Meridian track “Latuda”, a critique of Big Pharma and its effect on our over-prescribed culture. Other standout cuts include the first single “Codebreaker”, where moody horn stabs spar with gritty breaks as Trademarc punches himself back to life with full zombie-fist action, and “Honor Killing”, a two-verse double-time assault that showcases the rapper’s verbal dexterity, putting to rest at the outset any question of Trademarc’s bona fides.